It’s not time to pour the champagne just yet. “Ship” hit the main-stream news fan late last week when Labor Secretary Tom Perez game both sides until Friday to settle the dispute or he would ship them off to DC to continue talks downstream from the White House. All puns intended. When news broke Friday evening that a contract had been tentatively signed, my Twitter blew up. Anyone not completely familiar with how things work thought this was over. Far from it. I know of both Ports of Oakland and Portland have both had skirmishes over the weekend. Apparently Local 10 in Oakland was found guilty of work stoppages. And the Hanjin Copenhagen is yet to sail from Terminal 6 at Port of Portland! That ship has been sitting for 19 days… We have 45 containers sitting on dock still waiting to load. Some of those containers have been there since January 15th. It doesn’t take a rocket scientist to realize that this is hurting the small businessman and farmer alike.

For a timely update aired by the Ag Information Network, see here.

Shippers have a very tough road head of them. Ship lines are trying to clear the backlog at whatever means necessary. We are fighting every day to keep ahead of schedules, getting trucks to port within the very short time-frame we are given – and us Oregonian businesses and farms are now behind the 8-ball because our options just became much more limited with Hanjin announcing they are pulling out of Terminal 6 at the Port of Portland. In one announcement, Port of Portland lost 80% of their containers business.

The complete lack of remorse and total disregard by both the PMA and ILWU for the havoc that ensued during this continuing crisis is repulsive. See very brief press release here. No “thank you for your patience”. No “we’re incredibly sorry for the suffering that America has endeavored.” And definitely no sign of “we will all work together to make sure the West Coast ports become synonymous with the best ports in the world!” Because of this and because of the economic pain and damage, we simply cannot let this happen again. We’re hearing that the contract was for 5 years. The clock is now ticking, the deadline is now set, and our next battle has been named: preventing a small group of people from holding the American economy hostage the next time the contract expires.

In the meantime, some comic relief… Here are our new names for a couple of vessels: 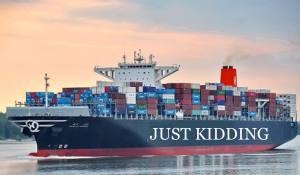 2 thoughts on “The battle continues… West Coast port crisis not over.”